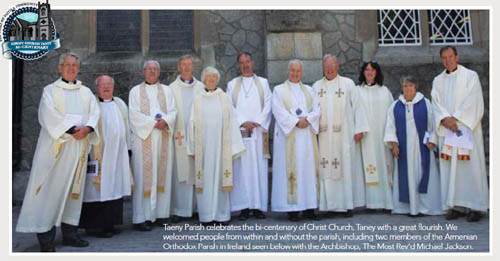 Two hundred years of faith and community were celebrated in

Christ Church, Taney on Sunday 24th June 2018. The church was packed for the bicentenary service which was celebrated by the Archbishop of Dublin, the Most Revd Dr Michael Jackson, while the Bishop of Cashel, Ferns and Ossory, the Rt Revd Michael Burrows, a son of the parish, was the preacher. The congregation, which included public representatives, many former Curates and members of the Armenian community who also use the church for worship, was welcomed by the Rector, Canon Robert Warren. He was celebrating a significant milestone himself - the 40th anniversary of his ordination. During the service, pupils of first class in Taney National School gave a rousing rendition of ‘Shine Jesus Shine’.

Launch of 'Taney - Progress of a Parish' by Carol Robinson Tweed

parish centre, Minister for Transport, Tourism and Sport, Shane Ross TD launched an updated parish history by Carol Robinson Tweed. In his sermon Bishop Burrows recalled the 150th anniversary of the church. His father, Canon Walter Burrows, was Rector in June 1968 and the young Bishop won the fancy dress competition for which he had dressed up as the church and wore a hat in the shape of the spire. Bishop Burrows said it was easy to get despondent now, with rising secularism and falling numbers, and think that the generations that have gone before had it easier. But he warned against being beguiled by the past. He brought the congregation back to June of 1818 when Christ Church, Taney, was consecrated. This was a dreary time in Dublin when the consequences of the 1798 Rebellion and the Act of Union were being felt. Taney was a rural community and people lived on small holdings. The population of Ireland was larger than it has ever been since but it was doomed to be the victim of a natural catastrophe when the Famine struck some years later.

In 1868 as the parishioners of Christ Church, Taney, 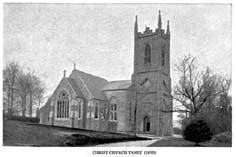 1918 was an awful time in Ireland, the Bishop stated with World War I coming to an end and a generation of young men lost and young women weeping for their loss. This was followed by the Great European flu epidemic which killed more people than the war. These were the years that were leading up to Independence, a time that was uncomfortable for many members of the Church of Ireland.

Moving to the Swinging Sixties and Bishop Burrows said 1968 was

a lovely time on the face of it but it was also the year of Humanae Vitae. The storm clouds were gathering in Northern Ireland which would lead to 30 years of conflict. “In 2018, not withstanding Brexit, we live in happier times. We have a delightful context in which to worship… So how will those who gather in 2068 remember us?” he asked. “For a parish church to reach 200 years is a moment of coming of age. As we come of age we must ask how the founders of this place would view us… On this, the Feast Day of the Birth of St John the Baptist, we must ask: Have we retained that edginess, that vision of what is possible, the authentic idiom of John the Baptist that can make our faith magnetic? May those of you who come back in 2068 look back on this day and think: It wasn’t bad in 2018.”

As the service drew to a close, Archbishop Jackson paid tribute to Canon Warren for his energy, vitality, humanity and spirituality and thanked everyone for the work they had put into bringing the service together.

Launching ‘Taney – Progress of a Parish’, Minister Ross described the book as a ‘”microcosm of what has been happening in the Church of Ireland over the last 200 years”. He said it was very readable and contained a fascinating history and narrative of Taney and its people, past and present. The book also encompasses the graveyard at St Nahi’s which goes back centuries, the Minister said noting the extensive history of the parish. The book is published by O’Brien Press and Ivan O’Brien, a parishioner of Taney, said the history of the parish, with graves in St Nahi’s going back to Viking times, placed Taney at the heart of Ireland. He paid tribute to Carol for the work she put into the book and everyone who had lent photographs which helped to build a picture of the community. Carol recalled writing the original parish history in 1990 and said the process of updating it had been great fun to do. She said all the information contained in the book had been researched but her main priority had been to make it reader-friendly and to show that Taney Parish was an integral part of the Dundrum community. 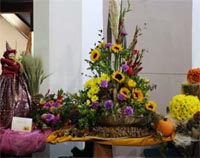 What a wonderful weekend in the life of Taney Parish and it is all thanks to you, the wonderful parishioners of our parish. I think everybody enjoyed the festive atmosphere both in the church and in the parish centre. There was a real happy, friendly buzz in the air all weekend. I have to thank you all for this success, I think nearly every parishioner was allotted a job and it was so nice to see a lot of familiar faces back to lend a hand and to give support to the venture. I want to thank all our catering ladies; they did a great job supplying tea/coffee and tray bakes.

Thanks also to Pat and his team for the

very successful raffle, and to our Building Team for making the flower boards. Special thanks to the Sunday school, Taney School, and two packs of Brownies for their wonderful displays. I have to thank our rector, Robert and our curates, Cathy and Nigel for all their support and help in this difficult fund raising project.

Sincere thanks to Tara O’Rourke for her support and for all the administrative work she carried out for us; it was really appreciated. We thank all our sponsors and people who made donations in memory of their loved ones, all of whom made a great contribution to the festival. Our thanks to Helen Geoffroy, who was a great help and support to us in so many ways, especially through her contribution to the catering for the weekend.

A very special thank you to all our wonderful flower 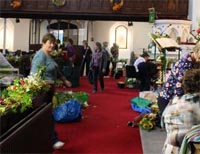 arrangers: those from the various flower clubs and the independent arrangers; their creativity provided displays that were both imaginative and artistic. Thanks also to Linda Dwyer Joyce who brought her event management skills to bear on the project and was on hand with support and advice throughout the preparations and the festival.

And last, but certainly not least, a very big thank you to Vera Scully and Lyn O’Doherty who, from February 2017 travelled with me on the Flower Festival road, standing by me through thick and thin. All the hard work has paid off, and people as far as Cavan, Wexford, Wicklow and many Dublin parishes are still talking about the welcome from Taney Parish and the wonderful Flower Festival. Well done everyone and a big thank you for your wonderful support.

You couldn’t be a member of Taney Parish and fail to notice the amazing weekend in early October when both the church and the parish centre were awash with light and colour; when the whole place was alive with the rush and tumble of presenting the beauty of creation in the church – while the creativity of so many gifted artists enhanced the Sinnamon Hall.

We are very grateful to the artists who submitted their work for the Art Exhibition – almost 270 paintings in total. The next step along the way was to hang 270 paintings and we are indebted to artist, Olivia Hayes, for sharing with us her skill and experience in what was a very challenging operation.

As with all such ventures, success would not have been 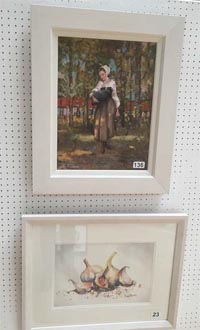 possible without the generous contribution of time given by so many helpers at the exhibition; we take this opportunity to extend our sincere thanks to all of them. In addition to everyone who was on the ‘duty rota’ for the exhibition, we also had wonderful support behind the scenes. We were fortunate to have Tara O’Rourke who kept us all on the right track and was marvellously supportive in every way, including the production of flyers, posters etc. Jo Bourke undertook 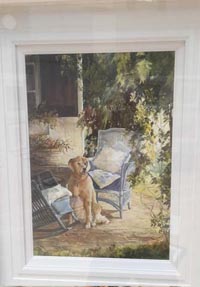 the demanding task of compiling the catalogue and Charlie Sloane very kindly calculated the income, the percentage outgoings and the basic expenses – a feat which allowed us to send out all relevant cheques and to draw a line under the event within a few days of the exhibition. And a big hurrah for Carol Eggers and her very obliging team who undertook the arduous task of collecting the hired boards for the hanging – packing them into a trailer – unpacking them at TPC and then carrying out the whole programme once again in reverse order when the exhibition ended. We are truly grateful for your Herculean achievement!

Last, but certainly not least, our thanks go to the wonderful catering team who provided teas, coffees, sandwiches – all of which kept up our spirits and expanded our waistlines in a most delightful way.
It was great to see the whole parish and so many from outside the parish turning up to share in a celebration which marked 200 years of a community caring and sharing together.... and the journey continues!